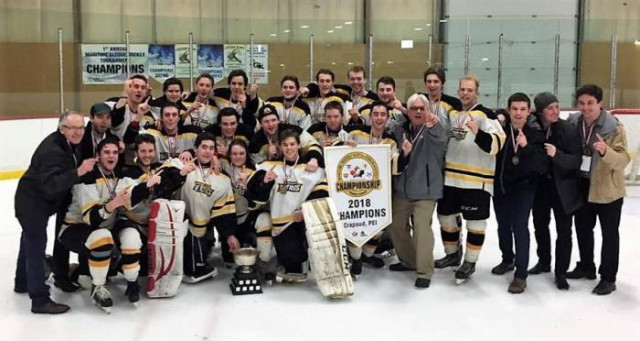 Tanner Power scored early in the second period which held up to be the winner as the Sherwood Metros downed the host South Side MacDonald's Excavation / EF MacPhee Lynx 4-1 on Sunday afternoon in front of a huge crowd to capture the 2018 Maritime - Hockey North Junior C Championship.

The win was the first for a PEI team in the 16-year history of the tournament.  In fact, there was only one other year (2015) when a PEI team qualified for the championship game.

The Metros were 5-0 against the Lynx in the regular season of the PEI league, but with the hosts making a strong effort to get to the finals, Sherwood could not take them lightly.  In fact, Tyson Beckingham put the Lynx up early in the game with a goal from Ryan Beckingham and Cameron Nelson before Logan Toole tied the game later in the period.

Power's goal put the Metros ahead 2-1 entering the third period and goals from Shawn Corney and Marc Cummiskey would be the insurance they needed to secure the title.

Blake Arsenault stopped 28 of 29 shots for the win, while Sean MacPhee stopped 34 of 38 shots.  The game was the last junior game of the careers of both goaltenders as this was their overage year.